Not only is this a long-awaited victory for Catholic/Christian pharmacists in Illinois, but also a great victory for religious freedom. 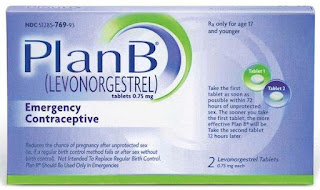 I don't really have time to elaborate, I really wish I did but I have a ton of homework, projects and exams to study for. This is really, really, really, really important for me, since this actually affects me directly, in my every day life. I work at a retail pharmacy (as a pharmacy intern), where anybody can just come in and ask for Plan B - or the "morning after pill." And they do. People don't want to face the consequences or take the responsibility for their actions, so they can just go to the pharmacy, pay about 60 bucks, and buy the magic pill---and that gets rid of "their problem." Hey, 60 bucks is much cheaper than raising a child, right?

Basically, the law that pharmacists could NOT refuse to sell the Plan B pill, even if it was against their religious beliefs, came out about 7 years ago...and when there were protests from Catholic/Christian pharmacists...they got fined and thrown in jail. Yep, it happened. Did it make it to the mainstream media? Probably not very much. No surprise. The mainstream media has a major liberal bias.......So, that was the end of the discussion. Pharmacists in Illinois just had to stick to this terrible law for 7 years.

You can read the full article here, or if not, below are some excerpts.
http://usnews.nbcnews.com/_news/2012/09/22/14026790-court-illinois-cant-force-pharmacists-to-give-morning-after-pill?lite

In 2005, former Illinois Gov. Rod Blagojevich mandated that all pharmacists and pharmacies sell "Plan B," the brand name for a drug designed to prevent pregnancy following unprotected sex or a known or suspected contraceptive failure if taken within 72 hours.

The Illinois appellate court agreed that the Illinois Health Care Right of Conscience Act protects pharmacists' decision not to dispense the contraceptives due to their beliefs.


But of course, there are still some liberal idiots who don't understand the concept of women's health and say stuff like this:


Ugh, the present situation with the government both walking all over the constitution, abusing their power, and taking away our religious freedom...and people still cheering for Obama like blind fools, makes me lose all hope for humanity. This may sound harsh, but it's the truth.

Well, anyways, YAY for this unjust law being overthrown! This means that I am no longer OBLIGED by the government to VIOLATE MY CONSCIENCE and have to sell you the abortifacient pill aka the morning after pill aka Plan B! booooyahhhhh government!!! and booooyaaah irresponsible people who just want to have all the pleasures in the world without facing any consequences. Sex is a baby-making act...so if you don't want babies when God sends them your way, then close your legs. For real. It's as simple as that.

Oh, this makes me so happy! We need more victories like this one! More importantly, we need to overthrow Obama's healthcare law! Darn you Supreme Court, why did you uphold that?
Posted by RestlessCatholicGirl at 11:11 PM