Just saw this on my facebook wall. Posted by a friend from high school. And it made my blood boil!
I still can't get over it. She's a Cradle Catholic. In fact, she's getting married in the Catholic Church this year. She probably goes to regular mass and receives communion.

Well then, why don't you understand that GOD created marriage??? Not YOU!!! So you don't get to decide what it is! You have no idea what marriage is if you think two men or two women
can get "married" just the same as a man and a woman. 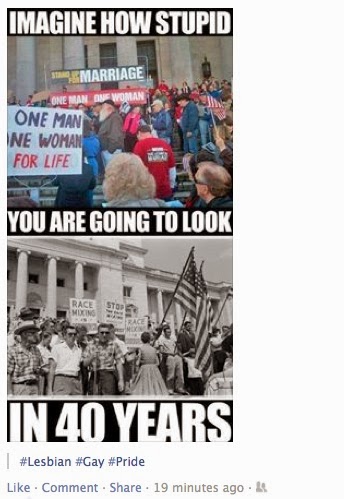 This is what she posted:

Seriously???
What does one have to do with the other?????
Tell me, because I do not understand.


Disclaimer: We Catholics are not homophobic, just because we don't agree with it or believe in it!!!  Phobia = being scared of something! If you don't believe in God, you're not deemed Theophobic, are you? We do understand some people are born with a homosexual orientation/tendencies and we tolerate these people and we love them just the same - but that does not mean we support their marriage to a same-sex partner! That's not what marriage is! That's not what the Creator of Marriage created it to be. You cannot change the definition/meaning of something if you are not the creator of it. Sure, you can go to court and have a "civil union" and pretend it's a marriage - but it will NEVER BE a marriage - according to its definition and creation. Period.

Sorry, but hearing all these illogical arguments and seeing stuff posted on facebook that is pro same-sex so-called marriage, especially by Catholics who go to church, really makes my blood pressure go up and makes me hyperventilate, just a bit.

Posted by RestlessCatholicGirl at 1:32 PM

Email ThisBlogThis!Share to TwitterShare to FacebookShare to Pinterest
Labels: Same Sex "Marriage", The Culture of Death